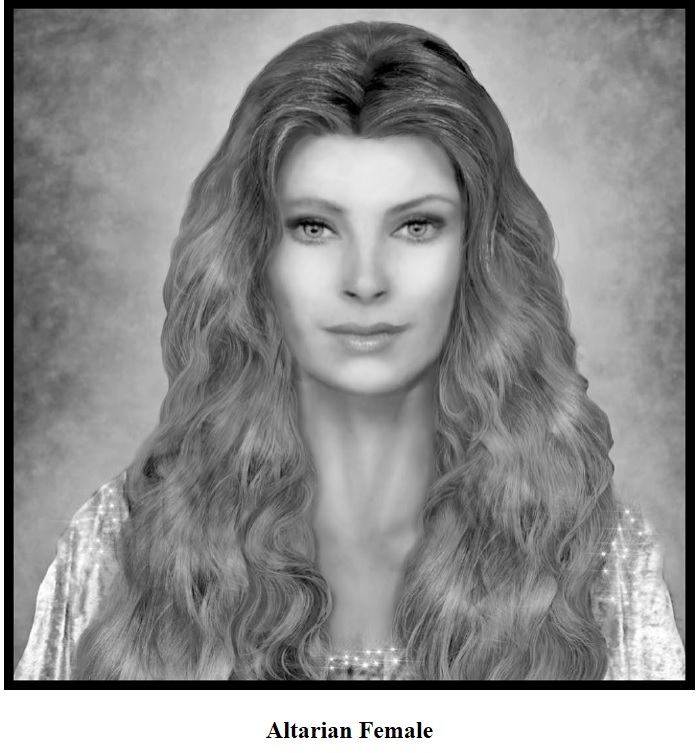 (a chapter from the book “The Extraterrestrial Species Almanac” by Craig Campobasso.)

Universal origin: Altarians are from the Aquila constellation. Inhabitable worlds in their immediate vicinity are home to other humanoids, reptilians and Greys. Altarians are great cohabiters with other races.

Physical characteristics: Altarians are indistinguishable from Earth humans though they are taller: men are six to nine feet; women are five feet nine to seven feet. Altarians are a beautiful race; men have toned, muscular bodies and women are voluptuous.

Although most are light-skinned, some Altarians’ skin tones range from blue, green, tan, and brown, to a variety of different hues due to breeding with other human races. The skin tone spectrum is a natural occurrence within star nations.

Altarians also study the colours in suns and stars in planetary systems to understand how the frequency of light denotes our different skin pigmentations,

Belief Systems: Altarians are a very intelligent, wise and learned race, and they follow the Cosmic Law of One. They study science and natural philosophy. It is in their nature to analyze the fundamental questions about creation, to study other human societies from across the universe, and note the similarities and differences due to culture and environment.

Altarians believe that the universe is a symphony and we are its instruments. As we learn from planet to planet, raising our octave, our frequency, our soul’s song, that in divine time, we will ultimately master the whole composition.

Cosmic Agenda: Altarians are members of the Galacterian Alignment and participate in the Melchizedek Star Seed Program. The Altarians will become our cosmic teachers once we are a fully conscious race.

In the fifties, Altarians reached out to US government officials and asked them to disclose their existence and of life in the universe. The government declined.

Technology: Antarians have Galacterian motherships, starships, thought-ships, fleet ships, and scout ships. All their craft and command centers use biological supercomputers. All craft are able to travel through time-space funnels and the innerspace continuum.

Their home world’s modes of transportation are teleportation portals designed for one or groups of any size. They also have sky buses that run on magnetic currents.

Consciousness Abilities: Altarians are fully conscious and sovereign beings. They are sympathetic telepaths; they feel a profound depth of others’ soul history and recognize the beauty of it.

Altarians explore the cosmos and dimensional layers by astral traveling in groups. It leads them to territories in their own dimension they wish to study and explore.

Dimensional Capacity: Altarians have multirealm commandership. They are able to reassemble their physical bodies or any matter from one location to another through a molecular stimulation of light codes. They can sweep an entire civilization from the ground up into mothership in less than a second.

Some Altarians come to our space-time from the future.