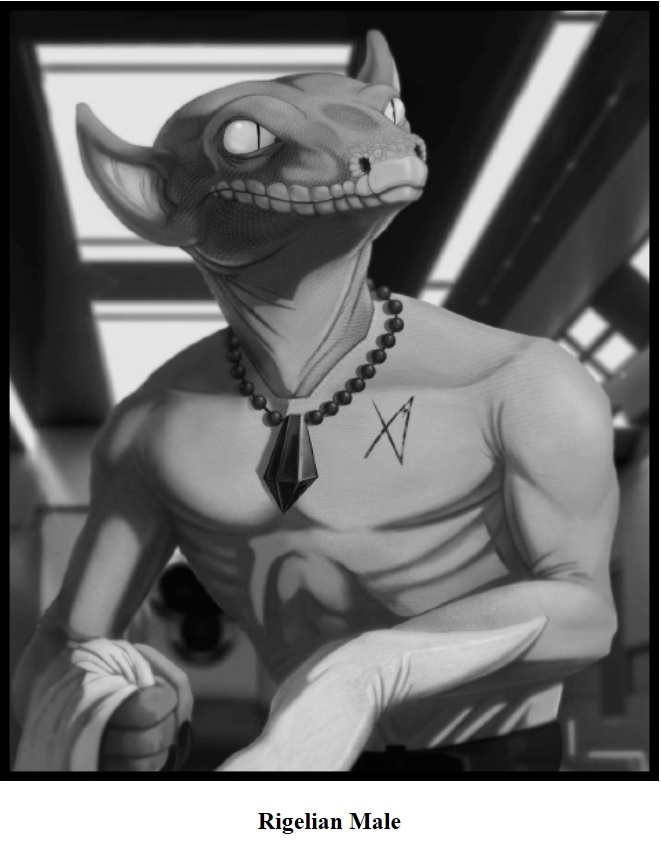 Universal Origin: Rigelians are from the Rigel star system in the Orion constellation.

Physical characteristics: The Rigelian’s head is shaped like an upside-down triangle, with large, pointed ears. Its eyes display a full iris with a tiny slit in the middle for a pupil, and clear eyelids, similar to a frog. Shoulders are square and taper to a thin waist. They have three extra-long fingers and a thumb with two joints, and three pronged, pitchfork-shaped feet – all clawed. Their flesh is a milky green.

Belief System: Rigelians are believed to resonate with the Cosmic Law of One.

Cosmic Agenda: Rigelians conduct scientific studies on Earth. They carefully select Earth people to explain their technology to, and share insights about their unique race. Rigelians want their contactees to share this information with the rest of the world.

Technology: Rigelians call their motherships galactic voyagers. They have specialized saucer-shaped craft that are only for interplanetary travel in certain atmospheres. Their craft have proton ion storage units that are used for rapid accelerative thrust. In the craft engine room, there are two boxes – one is a magnetic fluxerator, and the other is electrostatic. The ship’s fuel storage contains free electricity, positrons and positronium, similar to a hydrogen atom. The ships fly through a process of diamagnetism.

The metal of the outer craft is made to harmonize with a beam of highly energized photons. The binding energy of the atom created is generated outside the nucleus. These particles migrate toward the surface and manifest a magnetic field which repels all matter. The craft can be flown manually or by robots. They have an operating base, a planet in our galaxy. Through a black stone shaped like two triangular bottoms fitted together, worn around their neck, various areas on their craft open by touching the tip of the stone to the wall. The stone is programmed with the key sequence.

Consciousness Abilities: Rigelians are fully conscious and sovereign beings. Their language is a vocalization of chirping, squeaks, and long and short kissing noises. When speaking with other races, both parties wear a headband – the telepathic translator – where wires are inserted into the brain. These wires scan and pick up wave patterns, relaying messages in one language and then connect to the wave patterns of the other person, passing along the message in their language. Because this is a connected conversation, from brain to brain, the brain stores the entire conversation, and both parties are able to to recall the conversation as if being looped on a tape.

Dimensional Capacity: Rigelians are able to travel in the matter and antimatter universe.

From: The Extraterrestrial Species Almanac: The Ultimate Guide to Greys, Reptilians, Hybrids, and Nordics (MUFON) Paperback by Craig Campobasso