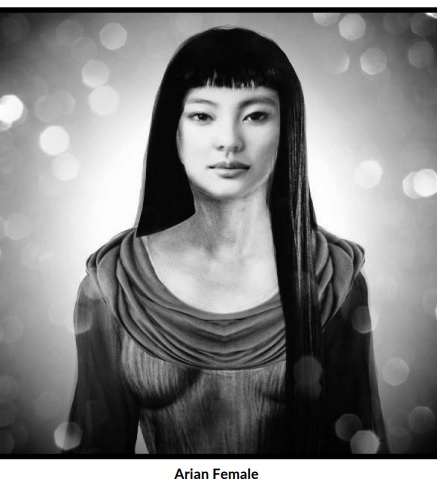 (a chapter from the book “The Extraterrestrial Species Almanac” by Craig Campobasso.)

Universal Origin: Arians come from the planet Arian, located in the Aldebaran system in the Taurus constellation.

Physical Characteristics: Arians are indistinguishable from Asian races on Earth. Women and men are slender and stand from five foot nine to six foot six. Their faces are oval-shaped with attractive features, and framed by lustrous, black hair. Their eyes are usually brown or black, and skin tones range from golden to yellow to tan. Their life spans are over four thousand years.

There is another Asian race, called the Gne, from planet Pall, in a neighboring system that is a part of their crew. The only difference in appearance is they have small, bud-shaped noses.

Belief System: Arians believe in the Cosmic Law of One. They believe all souls are comprised of the primordial cell, and because of this all are one and the same. Their advanced consciousness allows them awareness of the universe’s invisible and visible realms. They thrive on working with other races collectively, enjoying the bonds of universal brotherhood.

Cosmic Agenda: Arians are explorers of the galaxies, and their members include anthropologists, psychologists, biologists, geneticists, and gene specialists. They are experts of intergalactic languages—spoken word or telepathic. They study men and women from various civilizations across the universe, and collect genetic materials. When they come in contact with younger civilizations, such as Earth, they share their civilization’s history when they were at war with other worlds, and how they overcame their challenges. They warred for so long, and there was such a loss of life, that after countless years both sides came to realize how useless war was. They stopped manufacturing weapons and came together. They evolved, explored space, met their planetary neighbors, and built a cosmic community.

On worlds in conflict an emergency Melchizedek son is dispersed to be an intermediary between both sides. These sons function on many diverse levels of the universe, in this and other dimensional layers. They are able to do the impossible. One might think they are the very breath of God when in their presence.

Technology: Arian fleet craft use two fusion engines that operate in a vacuum, allowing them to travel through the antimatter universe. It takes two weeks to warm up their far-futuristic engines when they have been sitting for a time. Their elongated motherships are based on Galacterian technology and have extending appendages in the front, middle, and back. From tip to stern, the craft spans about 2,691 feet (ca 820 meters). They have eleven other races onboard their mothership from Aldebaran or neighboring systems.

Being language specialists, they have a translator box for every galactic language they have come across.

Arian healing machines are able to separate the physical and spiritual bodies, and then slice the pertinent elements for viewing. Once the source of a disease is isolated, colors and sounds are then employed for instant healing.

They are able to grow replacement limbs that function like natural limbs by using the patient’s own DNA.

They’re also genetically engineering new animal species that have a symbiotic relationship to the environment they are placed in.

Consciousness Abilities: Arians are fully conscious and sovereign beings. Their telepathic headgear amplifies brain frequencies 100,000 times to open channels of communication to the biological supercomputer onboard their craft.

Dimensional Capacity: Arians are multidimensional. They use the antimatter universe for travel, cutting travel time to a minimum.

From: The Extraterrestrial Species Almanac: The Ultimate Guide to Greys, Reptilians, Hybrids, and Nordics (MUFON) Paperback by Craig Campobasso